Election day and a flashback to a campaign from decades ago 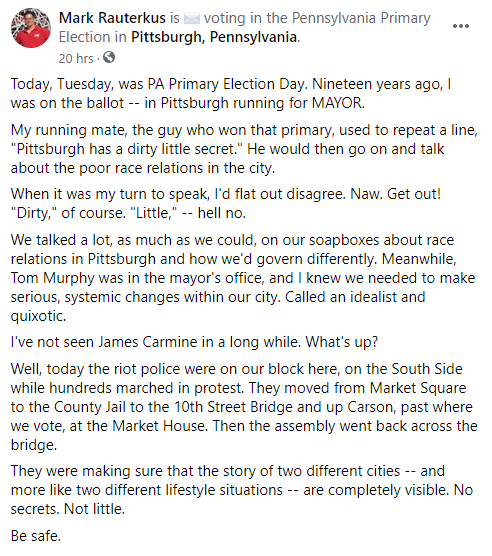 Tuesday, June 2, 2020, was a Pennsylvania Primary Election Day. Some 20 years ago, I was on the ballot -- in Pittsburgh running for MAYOR.

My running mate, the guy who won that primary, used to repeat a line, "Pittsburgh has a dirty little secret." He would then go on and talk about the poor race relations in the city.

We talked a lot, as much as we could, on our soapboxes about race relations in Pittsburgh and how we'd govern differently. Meanwhile, Tom Murphy was in the mayor's office, and I knew we needed to make serious, systemic changes within our city. Called an idealist and quixotic.

I've not seen James Carmine in a long while. What's up?

On election day, the riot police were on our block on the South Side while hundreds marched in protest. They moved from Market Square to the County Jail to the 10th Street Bridge and up Carson, past where we vote, at the Market House. Then the assembly went back across the bridge.

They were making sure that the story of two different cities -- and more like two different lifestyle situations -- are completely visible. No secrets. Not little.

The event was peaceful on the South Side. I didn't hear of any broken windows. Nothing bad. It was moving.

Mark Rauterkus:
Meanwhile, notice that EZ Boy Chair, with upholstery, trash, sitting on the left on the sidewalk? That's funny too. It's "illegal" thanks to the legacy of completely ineffective legislation from the our district's existing City Councilman. Can't put furniture with upholstery on the sidewalk cause the Mountaineers might win big football game, or a riot might seek some kindling.

Oh, and the park, that green patch on the right, without its basketball hoops and swings for the kids, and closed rest rooms too -- is in need of new light stand as the other fell down due to rust a couple of weeks ago when some high winds came. Don't get me started on the parks.

Swim, SKWIM and water polo coach in Pittsburgh, PA, USA. Also the webmaster for the International Swim Coaches Association and a publisher at CLOH.org, 4Rs.org, SKWIM.us and a former small-press, Sports Support Syndicate. Former free-market candidate for public office on various occasions, generally as a Libertarian.